We had driven for several hours from that day’s launching point next to Mesa Verde National Park in southwestern Colorado. After passing through Amarillo, a wall of dark clouds to our north tracked us for miles before finally slamming into us. With heavy rains slashing down, I slowed our SUV to avoid hydroplaning. Soon, though, intense gusts of wind began pushing us nearly off the road and further limited visibility, so I pulled off onto the shoulder to wait for the worst of the storm to pass. That’s when it really hit us.

It sounded like 500 people with hammers in both hands were pounding away on our car as hard and as fast as they could. Buckets of golf ball-sized hail poured out of the sky. We thought the windows and windshield would break at any moment. I was trying to figure out what we would do when that happened – when wind and rain and hail would rush into the car. Then the storm eased just enough that, as prayers filled my mind, we eased back onto the road and tried to make our way out of the storm. The intensity slowly decreased and we we were able to get ahead of the storm after about 15 more minutes of tense driving.

Despite driving through a couple of more downpours (no more hail, at least), we were able to make it to Wichita Falls without having to make any more stops. A quick survey revealed that the hail had been soft enough to not dent the car, but the plastic skylight covers were not so fortunate. All three were shattered and had to be replaced. Rain did get through the broken skylights but didn’t do any permanent damage. 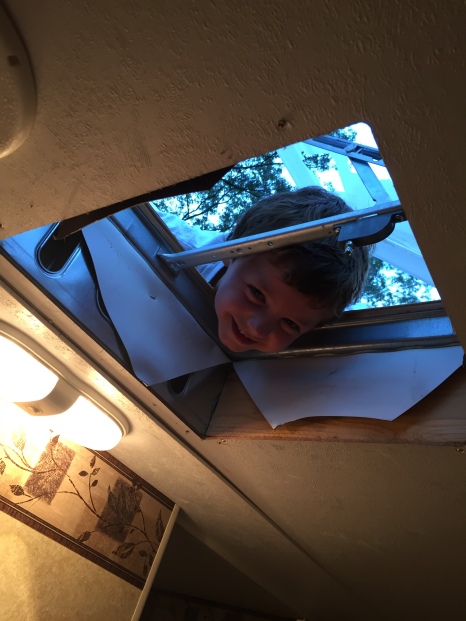 Jack loved getting up on the roof to help install the new skylight covers.

We finally made it to the Yogi Bear-themed campground near Jackson, Miss., on Aug. 4th. The next morning, Jessica dropped Ollie and me off at the rental car place and we headed up to Annandale Golf Club for the Big “I” golf tournament while Jessica headed back to the campground. 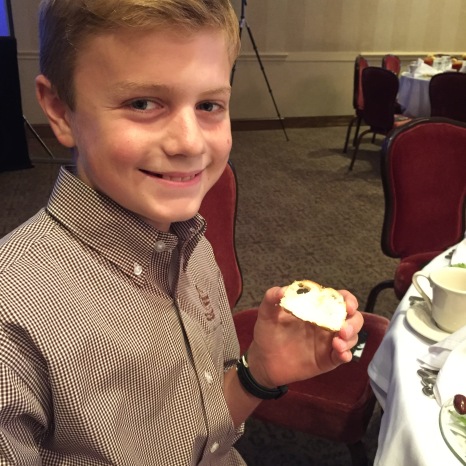 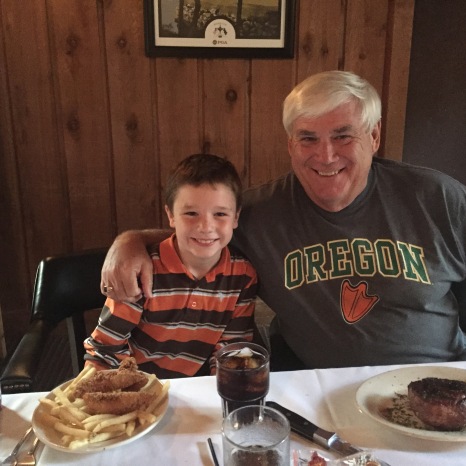 Tournament director Keith Carriker invited the whole crew out for the final dinner. Steak and seafood and desserts oh my!

For the last 10 years, I’ve spent a week shooting video at the Big I, a junior golf tournament held at different venues across the country. I’ve been able to take Burton with me for two years and then Ollie for the last two years. By far, the boys’ favorite thing about the tournament is all of the food. There’s breakfast buffets and lunch buffets and dinner at awesome restaurants. The Big I staff were blown away with how much seafood Burton could put away, and Ollie has been no less eager. The boys just really love to eat. And eat. And eat.

The golf tournament itself is always a lot of fun. These are some of the best junior golfers anywhere who will play college golf for the country’s elite programs. Capturing their amazing skills on camera always reminds me of how good they are and how not good at golf I am. It’s also great to catch up with Keith and the whole crew who have become good friends over the last decade.

Waiting in the rain

The theme of the week was rain, which was to become a not-so-welcome guest over the next several weeks that followed. The tournament is supposed to go four rounds, but the rain was so constant and intense that we could only get two rounds in over the course of four days. Still, we really enjoyed it and Ollie loved sleeping in the hotel and all of the food, even if it was strange to be away from Jessica and the boys for most of the week. All hail the hail. All hail the rain. And, most importantly, all hail the endless buffets.