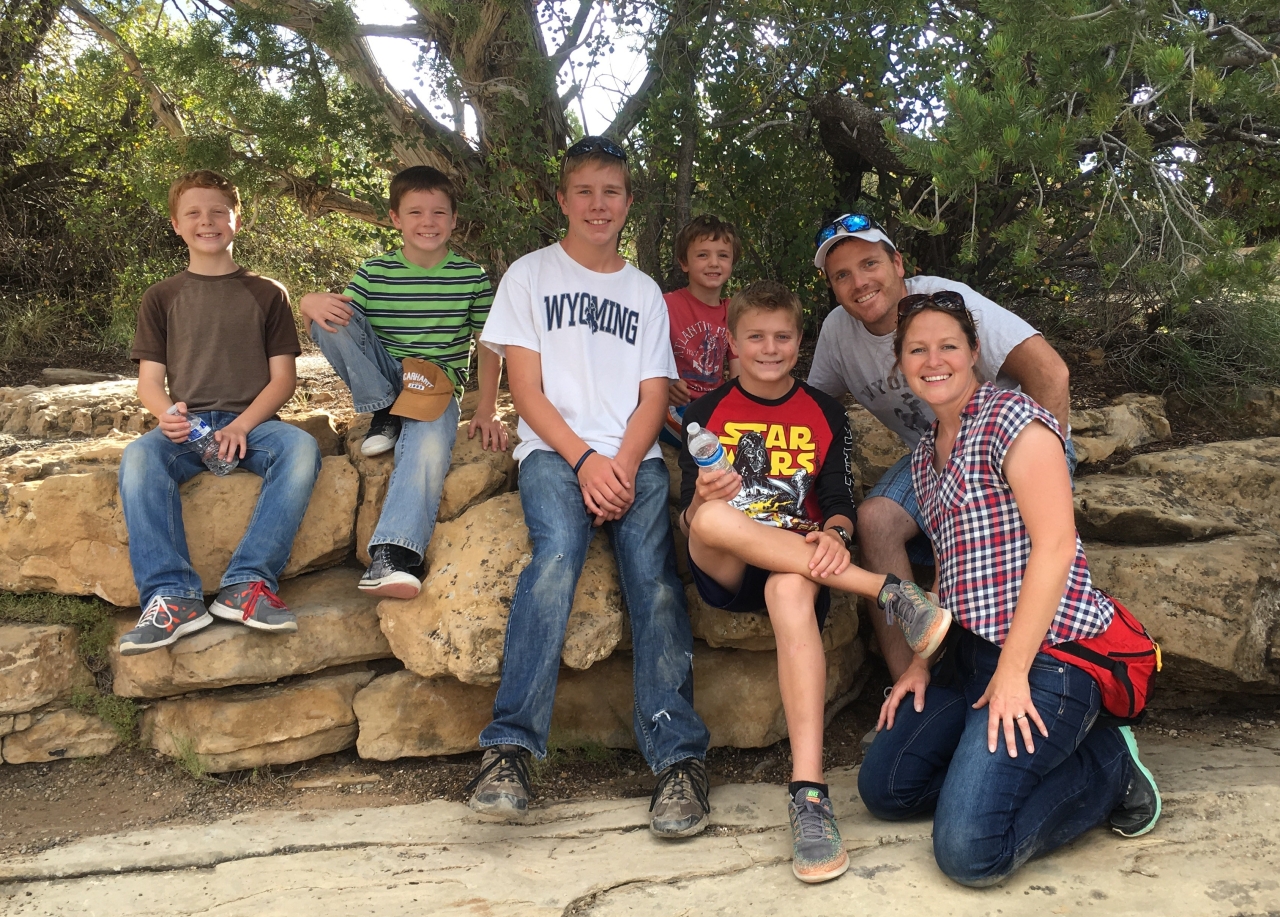 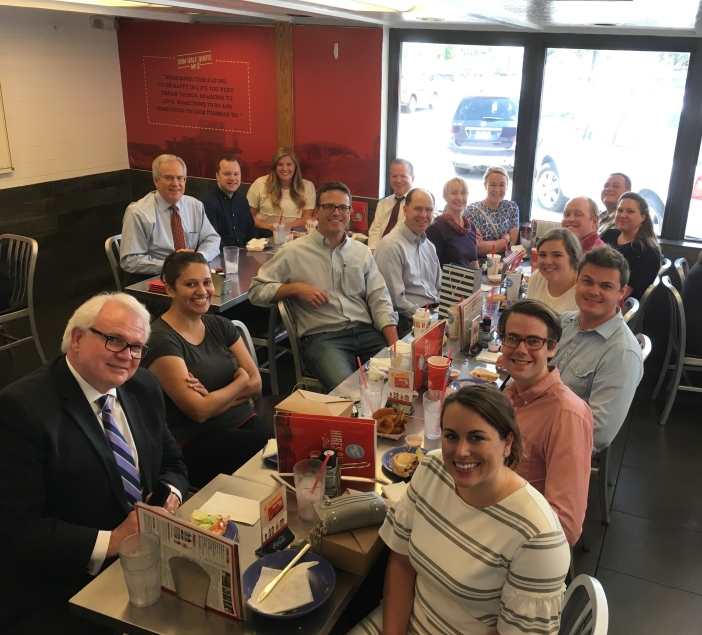 Such good friends and colleagues! My last lunch at Sutherland was at HIres Big H, where I earned the nickname, “Two Shakes,” because, why choose? Just get both!

Of course, endings are tied to beginnings, and we pulled out from Mark and Jan’s on Tuesday, Aug. 1st (more hard goodbyes!!) to begin our full-time RV journey. 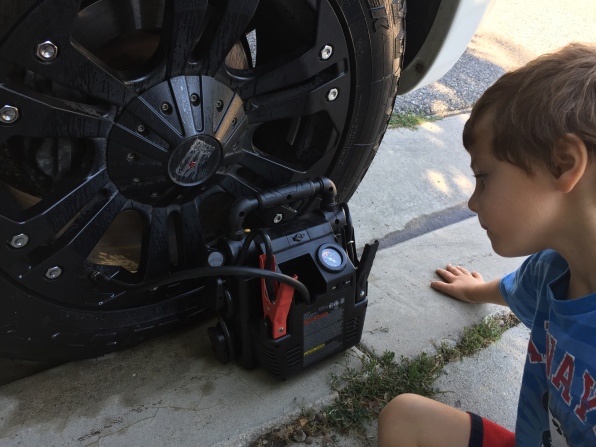 Making sure the car tires are ready to go! 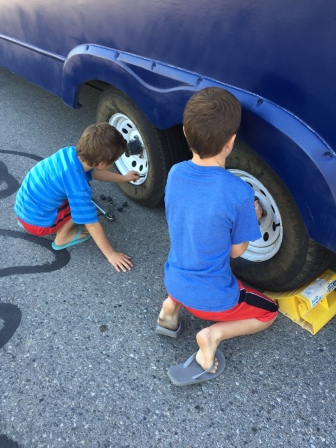 (and the trailer tires, too!) 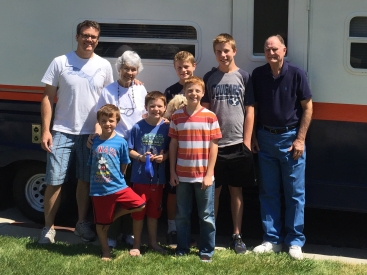 Before leaving the Wasatch Front, we stopped by Grandma and Grandpa Mitchell’s in Spanish Fork for a tasty lunch. Growing up, we were lucky to have Grandma and Grandpa trek out to Minnesota and then visit them in Price, Utah, and it was great to see them on our way out of Utah.

I had a video shoot to get to in Mississippi that started Aug. 5, so we thought it would be fun to visit Mesa Verde National Park in southwestern Colorado on the way. After about six hours of drive time, we made it to the RV resort and out of Utah uneventfully. Well, almost all of us made it out, and almost uneventfully.

We pulled into our site at Mesa Verde RV Resort at about 10 p.m. That’s when Jessica noticed our license plate was gone. The poor license plate on our Sequoia came loose somewhere between Moab and Mesa Verde and is currently grazing with the range cattle.

I noticed the plate had gotten a couple of small tears around one of the screws thanks to an especially bad car wash in Utah. But I didn’t expect the entire plate to fly off as we tried to leave the state—seriously, have you ever heard of a license plate just ripping off a car and flying into the wild? All we can figure is that the buffeting winds during the drive made the tears in the aluminum plate grow to the point where it pulled off the one screw and then ultimately tore away from the other screw (apparently four screw holes on the Sequoia for the license plate is an upgrade we didn’t pay for … ). 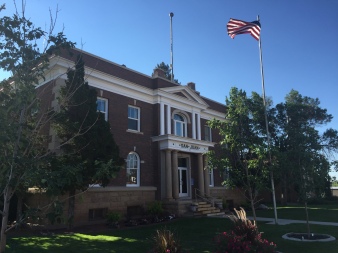 The friendliest DMV in Utah

And the friendliest True Value

Fortunately (I soon discovered), the state of Utah allows you to get a new license plate from any DMV office. The closest one was in Monticello, just an hour from where we were staying in Colorado. So, I got up early Wednesday while the kids slept and made the trip back for what turned out to be the friendliest, most painless, most enjoyable DMV experience I’ve ever had. And then an equally helpful, amiable shopping experience with Brian at the True Value across the street to get an electric screw driver, drill bits, some sheet metal screws and some Loctite screw glue to make sure the new license plate stayed close (I gave our car the four-screw-hole upgrade).

I made it back to the RV resort and we were at Mesa Verde National Park before noon. Because the cliffside Puebloan dwellings are situated on actual cliffsides, for safety reasons the park limits the number of visitors during each guided tour. The first available tour slot for the seven of us was 4:30, which actually worked out great because, 1) it takes an hour to drive into the park from the welcome center, 2) there is a lot to see (museum, lots of kivas and dwellings from various time periods on top of the mesa, amazing canyon and mountain top views, a mama bear and baby cub, wild turkeys, lizards, etc.), and 3) like Christmas, the anticipation is the best part.

Burton first spotted the mama black bear and cub as we were driving in the park on our way to the museum. We turned around for another look and all of us were able to see the cub, which just stared at us from about 50 yards away in a small clearing at the top of a brush-covered hill. We love nature!

As it turns out, Brian from the Monticello True Value used to work at Mesa Verde and said his favorite cliffside dwelling was Balcony House, and not the more popular Cliff Palace. When you buy your tickets, you can choose to get a tour of one or both. They each take an hour, which we couldn’t do, so we decided to follow Brian’s advice and went to Balcony House—it was spectacular! 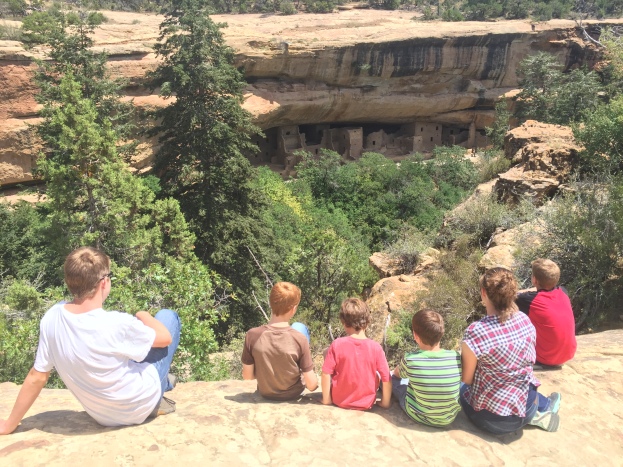 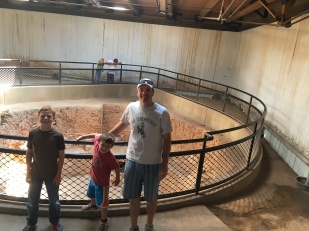 Max, Jack, Dad and a kiva 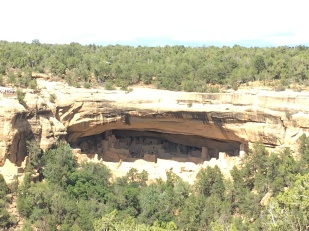 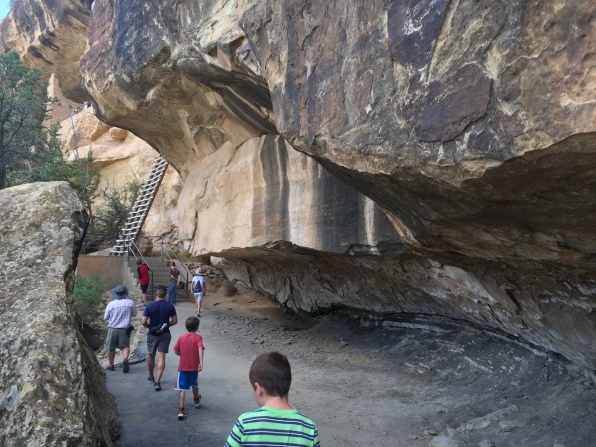 Walking up to the Balcony House ladder 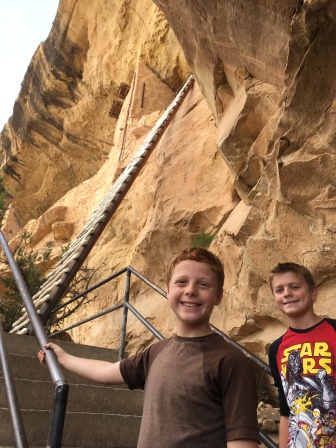 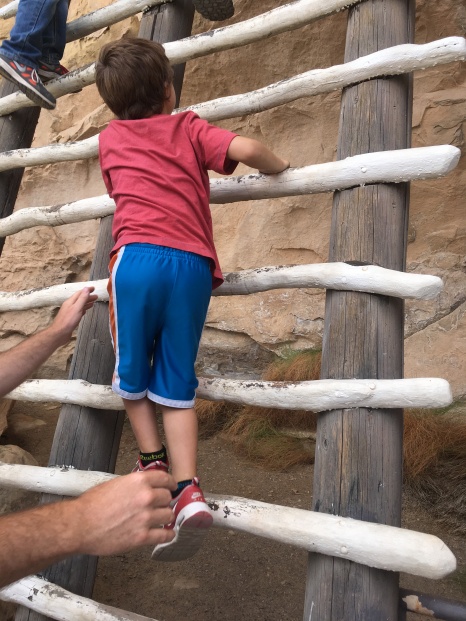 Jack heading up the ladder 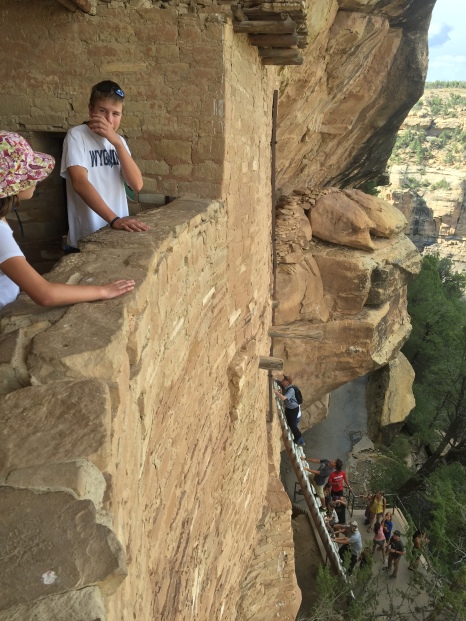 Up in Balcony House 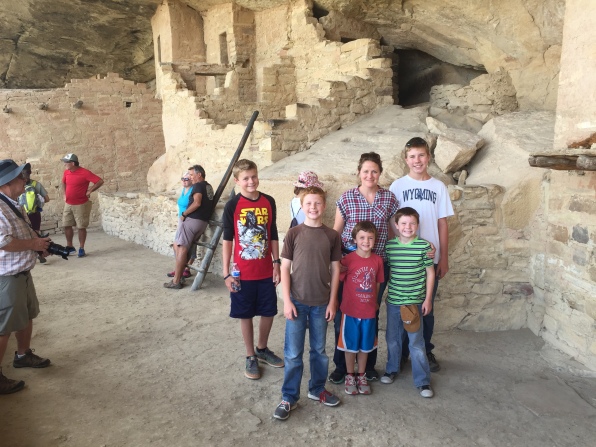 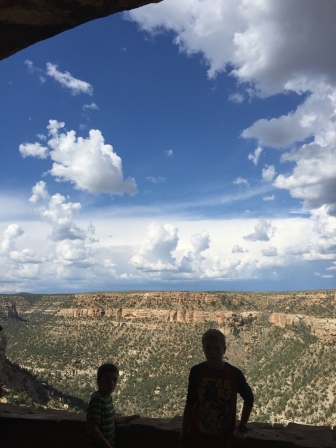 A room with a view! 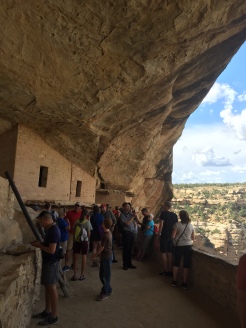 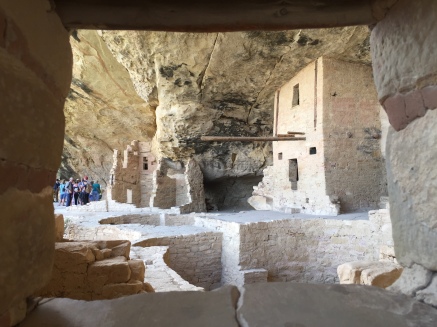 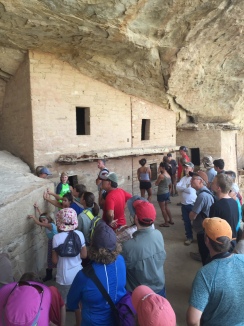 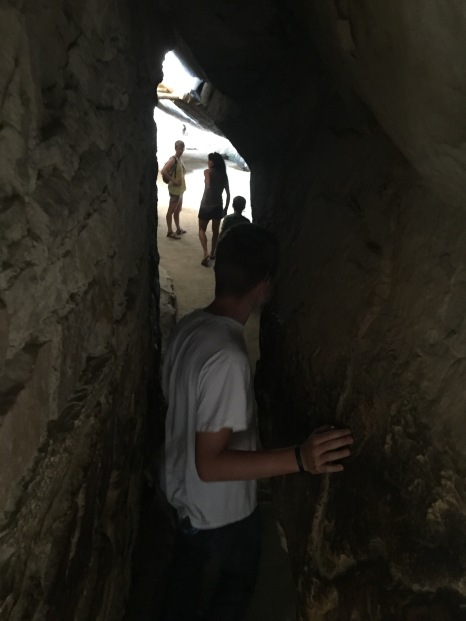 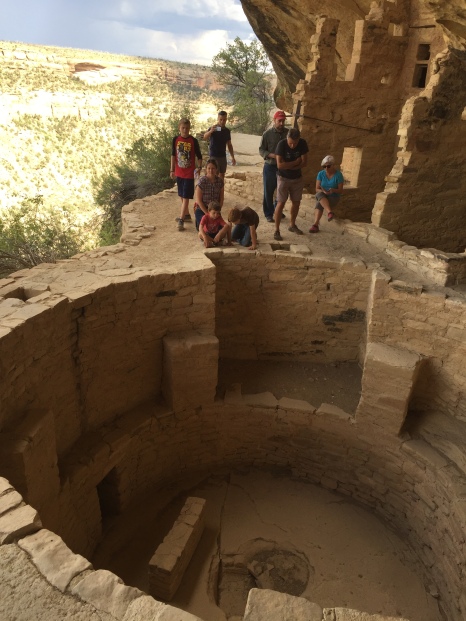 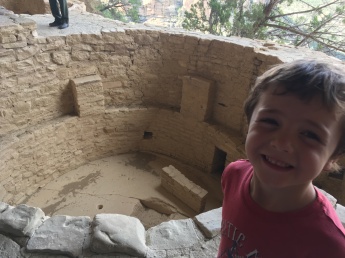 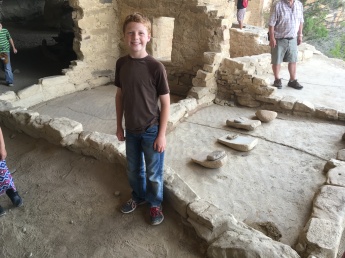 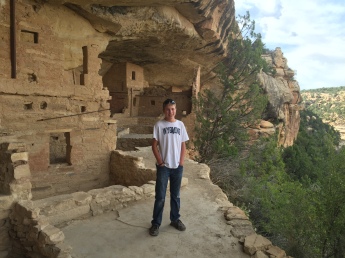 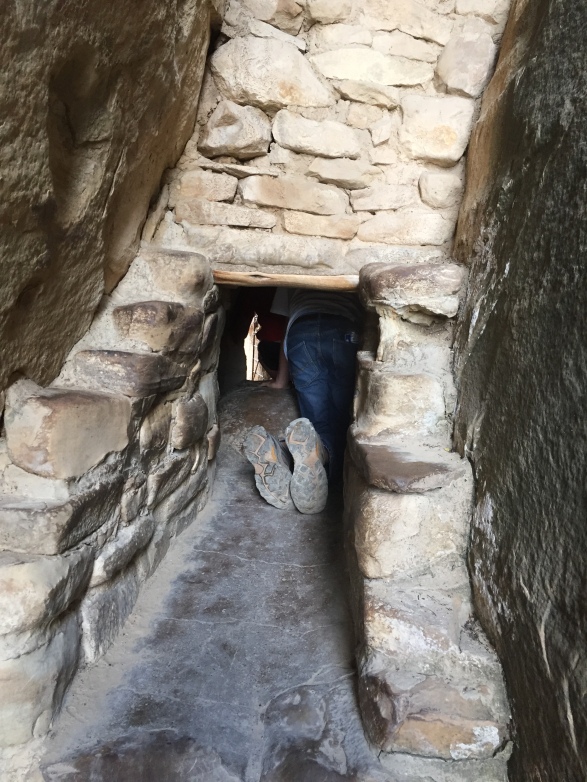 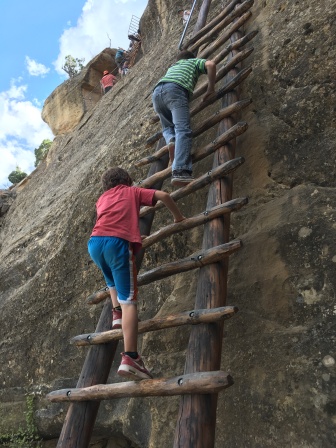 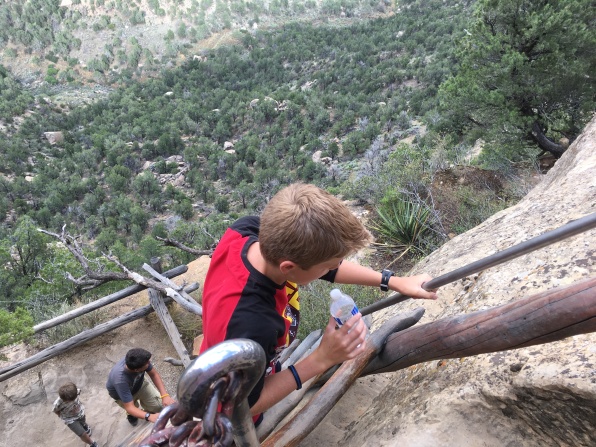 Ollie on the last ladder

To get to Balcony House, first you have to climb a 32-foot wooden ladder. Then, as you move through the dwelling, you have to go through a series of passageways and small tunnels. We all felt like Indiana Jones (we even saw a snake. It was dead and smooshed in a parking lot, but still … ).

Simon said he wanted to be a Pueblo Indian and live on the side of a cliff, but just with more clothes on.  🙂 The ingenuity and craftsmanship of the people who lived there from 600-1300 AD was inspiring, as was the beauty of Mesa Verde. 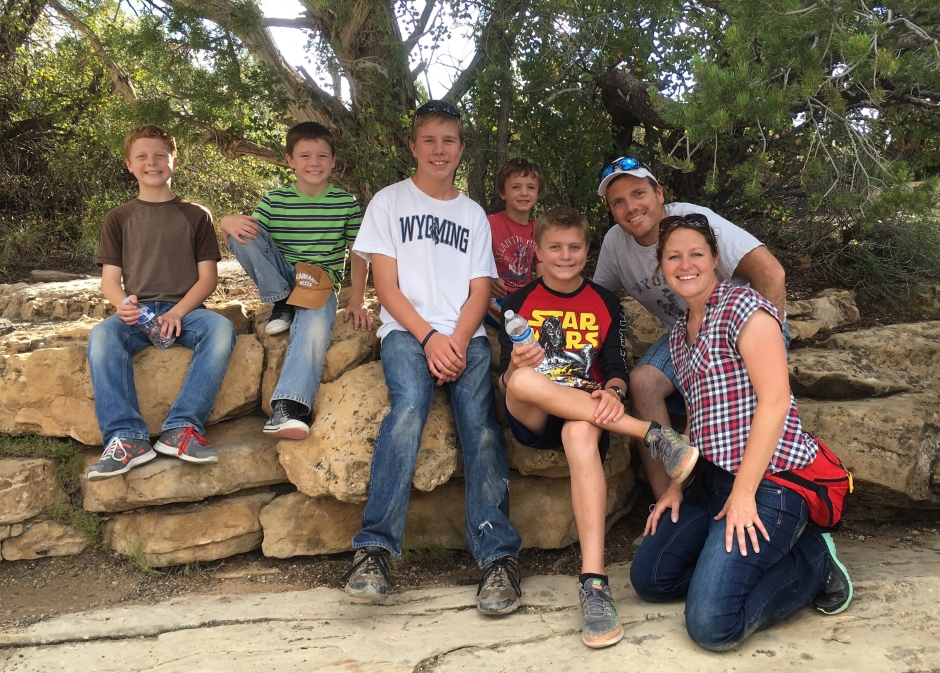 We made it back to the top!

Mesa Verde was a great first stop on our trek east. Little did we know what Texas had in store for us …. And that, dear reader, is a cliff hanger! Get it? A little double entendre! The Pueblo Indians, hanging out on the cliffs, and then a tease into our next week’s adventure?! *Sigh*