Simon’s special day started the night before when he asked if I could put his robe in the dryer so it could be ready in the morning.  He had a smudged mustache from being Mario all day and lucky for me his excitement made him a little more cuddly.

Since his birthday fell on a Saturday, Dad and I were hoping to sleep in just a little but, there is no sleeping in on birthdays!  I think Birthday boy had been up a while and he sent a runner to tell us he was getting hungry. 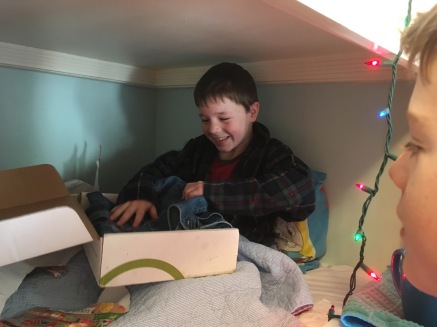 We tried to light 8 candles on a lemon bar but mostly ended up creating wax frosting to be scraped off later.  Lucky Charms, hot chocolate and his birthday cards made it to the oven. On the triple bunk, Simon’s is the middle one.  We call it the oven because it’s easy to put him in bed like a gingerbread man into the oven.  I don’t know how many more birthdays we will be able to do that!

Jack had drawn some pictures for him and Simon opened his nice cards from Grandma and Grandpa and Aunt Sue and had one more thing to open.  Usually presents come later but this one needed to be opened first thing.  When you are 8 and you love overalls, you get overalls!

In his new duds and with a full tummy, Simon went with Dad to run errands.  A little shopping, a car wash and, what?  A stop at Culvers!

By special request we had crepes and nutella for dinner and then the games began.  In addition to playing Mario together, we played the Simon/mario game.  It had adventures like, smiling contests and wall-sit contests, mario jumps, pickle juice if you land on a bad guy and the favorite, riding a yoshi on the sidewalk around the green space out front.  And against my better judgement, a carrot eating contest. 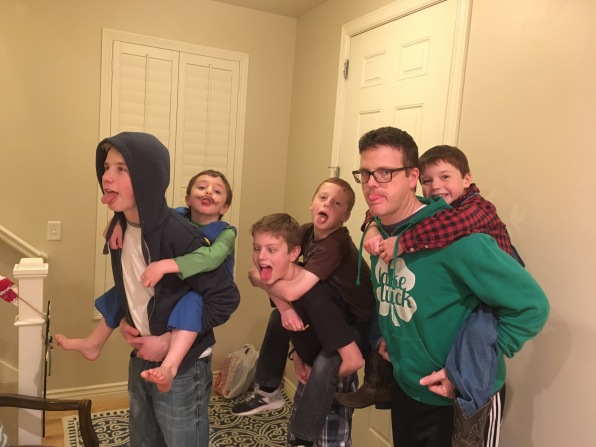 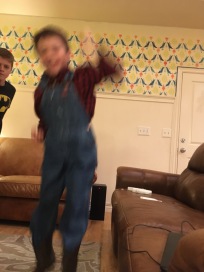 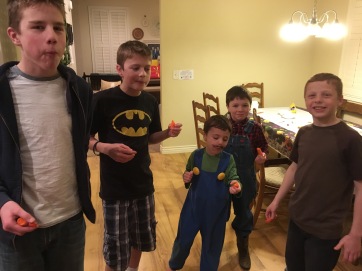 Max couldn’t wait for present time as he had spent his birthday money buying presents (awesome art supplies) for Simon.  The other three brothers also went in on a present, which included an entire bag of Double Bubble and a t-shirt.

We ended the day way past bedtime and so grateful for our happy, sweet, spunky Sy. Happy birthday to him, happy 8 years for us.